Orwell Hung by the Attorney General 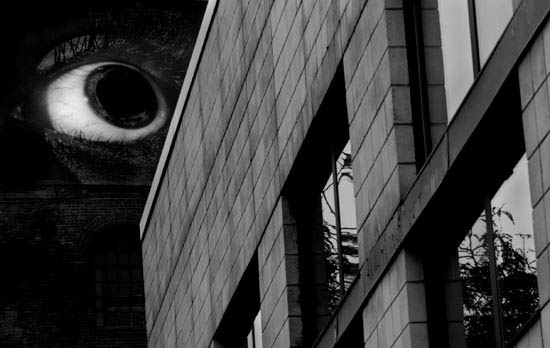 I have been wanting to post a piece related to Orwell’s 1946 essay “ Politics and the English Language”  for some time. I admired how Orwell understood the relationship between language and how it affects quality of thought, and influences behavior in the political sphere (and this is true in the personal and social spheres as well). While reading the news online on January 25th I discovered I was not alone in my appreciation. The new attorney general and I share a common interest, according to an article by Reuters. It’s remarkable how Orwell appeals to a wide spectrum of people, and that his insights are used (or co-opted) to justify a variety of political positions — in this case I will refer to state sanctioned torture.
According the Reuter’s article, Attorney General Michael Mukasey proudly hangs a portrait of George Orwell in his office alongside a portrait of former Supreme Court Justice and Chief Prosecutor at the Nuremberg War Trials, Robert Jackson. Mukasey reportedly doesn’t celebrate Orwell’s totalitarian society as depicted in the novel “1984”, but Orwell’s “clarity” expressed in his essay “Politics and the English Language”. Along the same lines, Mukasey has equal appreciation for Justice Jackson’s “clarity of thought and expression”. If only Mukasey would have demonstrated the same admirable clarity as these two anti-totalitarian crusaders when he testified about one of the President Bush’s favorite maritime activities – waterboarding. One might suspect Orwell would recoil at the irony of Muckasy’s mutual esteem for him and Justice Jackson, in light of Mukasey’s refusal to stand against this centuries old method of torture. On the other hand though, one could say that Mukasey was very clearly Orwellian in his use of ambiguous language:
“I do not believe that it is advisable to address difficult legal questions, about which reasonable minds can and do differ, in the absence of concrete facts and circumstances,” he said. “With respect, I believe it is not an easy question. There are some circumstances where current law would appear clearly to prohibit the use of waterboarding. “Other circumstances would present a far closer question.” ( US Attorney General says CIA not currently authorized to use waterboarding)

Recognizing a carefully crafted evasion and the futility of directly questioning Mukasey on the legality of waterboarding Senator Ted Kennedy simply asked: “‘Would waterboarding be torture if it was done to you?’”, to which Mukasey replied “‘I would feel that it was’.” ( Senators Push Mukasey on Waterboarding)

The attorney general was very careful to frame the issue in terms of how he would “feel” versus what he would legally “believe” or “conclude”. This leaves his evasion intact by changing context to “feeling” when Kennedy was clearly addressing “certainty” in his question, leaving open — just because it feels like you are being tortured doesn’t make it so, and legality is not addressed when you discuss feeling. Mukasey carefully focused his response to appear like a feeling being, but in the same turn communicated that “legality” rests on standards (other than feeling) that he would not address.

Though the new attorney general stayed deliberately fuzzy, there is clarity on the history of waterboarding from NPR, and we can see what it looks like

How does the corrupting use of language in politics by those in power work? Let’s consider this quote from the essay Muckasy so highly esteems: “ Politics and the English Language“:

In our time, political speech and writing are largely the defense of the indefensible. Things like the continuance of British rule in India, the Russian purges and deportations, the dropping of the atom bombs on Japan, can indeed be defended, but only by arguments which are too brutal for most people to face, and which do not square with the professed aims of the political parties. Thus political language has to consist largely of euphemism, question-begging and sheer cloudy vagueness. Defenseless villages are bombarded from the air, the inhabitants driven out into the countryside, the cattle machine-gunned, the huts set on fire with incendiary bullets: this is called pacification. Millions of peasants are robbed of their farms and sent trudging along the roads with no more than they can carry: this is called transfer of population or rectification of frontiers. People are imprisoned for years without trial, or shot in the back of the neck or sent to die of scurvy in Arctic lumber camps: this is called elimination of unreliable elements. Such phraseology is needed if one wants to name things without calling up mental pictures of them….. The great enemy of clear language is insincerity. When there is a gap between one’s real and one’s declared aims, one turns as it were instinctively to long words and exhausted idioms, like a cuttlefish spurting out ink. In our age there is no such thing as “keeping out of politics.” All issues are political issues, and politics itself is a mass of lies, evasions, folly, hatred, and schizophrenia. When the general atmosphere is bad, language must suffer….. But if thought corrupts language, language can also corrupt thought. A bad usage can spread by tradition and imitation even among people who should and do know better. The debased language that I have been discussing is in some ways very convenient.

Muckasy’s careful framing of the issue and evasive language succeeded in getting him confirmed to the highest law enforcement position in the US. Now he is free to determine the shape the frame, context, timing, and urgency surrounding the debate over state sanctioned torture. (See: “ So Is Waterboarding Torture? Mukasey May Never Say” )

What I gather is those who control the seats of power (including political, corporate and the media) know how language can be used to obfuscate and manipulate rather than clarify and inform. The unsuspecting are left bewildered by those who manipulate language to influence our thoughts, beliefs and actions. Unless we stay aware about the processes underlying how language is used to distort and control how we think and act, we become unconscious victims of the hidden intentions embedded in the messages directed at us. In the simplest terms, we need to understand how issues are framed and who is doing the framing. We also need to understand the social and historical contexts of the information coming our way. This way we have a better chance of challenging deception and wresting control of the debate on the issues we care about.
For additional reading about language, persuasion and propaganda, I recommend:

One response to Orwell Hung by the Attorney General