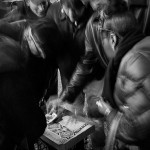 My letter to the Washington State Insurance Commissioner copied below resulted from an experience of believing one thing and realizing the truth lay in the murky shadows of systemic corporate maze, much like a game of 3-card Monte.

I wrote this letter following encouragement I received during a personal conference with Washington State Senator Karen Keiser (former chair and ranking member of the Washington State Senate Health Care Committee), and State Representative Tina Orwall.  Both of these very receptive legislators represent the district in which I maintain my private Psychology practice.

The prime issues are outlined in my letter.  Since sending this letter, I was informed that the Insurance Commissioner’s office is looking into how provider networks are managed and (not) maintained in Washington State.

Recently I was given a link by a colleague reporting that the Florida Medical Association is supporting litigation filed in Connecticut against United HealthCare because of its plans to “slash” the provider networks in AARP Medicare plans.  I find it amazing that United HealthCare sponsors PBS and NPR with the tagline provided to me via e-mail by NPR Audience and Community Relations on 1/14/14 —“UnitedHealthcare, with information on doctors, treatment options and cost estimates for patients to make educated health decisions. UHC.com.”   At the same time UHC has no compunction about cynically limiting “consumer” choice so the CEO Stephen Helmsley can be compensated upwards of $170,000,000.00 during the past 5 years alone according to Forbes.com.

I am a Washington state licensed Psychologist, and have been in private practice for 21 years. My office is in Normandy Park, the state legislative districts of Senator Karen Keiser, Representative Tina Orwall, and the US congressional district of Rep. Jim McDermott.  I am writing to inform you about 2 matters I believe have adverse impact on many healthcare professionals and citizens of Washington state:

2.    Questionable adequacy of due diligence by insurance companies/networks in maintaining up-to-date lists of provider panels, and lack of access to healthcare due to outdated and inadequate provider panels.

Here is a history of the first matter.   It began with agreeing to sign an individual provider contract with Optum Health (subsidiary of United Healthcare) for the benefit of a client whose insurance was changed by his employer in late 2012 or very early 2013.  I was previously on panel with Optum and its predecessor United Behavioral Health for a number of years, and resigned in 2012 due to extreme satisfaction with their policies and procedures, provider relations, frequently long hold times during attempts to contact Optum by phone. When I received the first reimbursement, it was at a lower rate than agreed in my contract.  Surprisingly, the payment voucher indicated I was a member of an unnamed affiliated network, and was therefore being reimbursed according to that network’s lower fee schedule.   Multiple phone calls to Optum (with extended hold times of 20 minutes and longer) were frustrating and unsatisfying.  I could never reach a netwok/contract manager at Optum.  I persisted several times but was eventually told by a general customer service representative the name of the affiliated network.

A phone call to the affiliated network –“TC3” — resulted in my being told I was enrolled in their network, and that Optum invalidated my individual contract.  I was never contacted by Optum about the contract termination, despite subsequent phone calls with the usual long hold times (and disconnections) to Optum.   In addition to TC3, I eventually discovered there was another network called  “HealthSmart” which coordinated benefits with TC3.  Interestingly, I never heard of either of these companies.  As a result of my confusion I initiated phone calls and e-mails to these companies.  A total of 9-10 emails were exchanged  aside several phone calls.

I requested information about TC3, HealthSmart and “Interplan”, as well as a copy of a signed contract from the outset.  I was shuffled from person to person beginning with TC3 (Ms. Tanya Lodge, Ms. Monroy).  Ms. Monroy, did not respond to my list of very specific questions (of which I can provide a copy), though she claimed to Ms. Lodge that several messages were left on my office voicemail.  That was not possible as my old phone was disconnected and I cancelled messaging to that number prior to this matter with the Optum contract.    The next thing I know, I was contacted by Mr. Kelis Siner at HealthSmart and subsequently Ms. Sherry Steel.   I eventually received a copy of a signed contract.  That contract dated from the early 1990’s for a company called “Integrated Health Network” which contained an “assignment” clause.

I never found out exactly how HealthSmart came into possession of this contract, though I assume it was via unannounced network merger.  Sherry Steel acknowledged in a phone conversation the contract was signed “a long time ago”, and she would therefore nullify immediately according to my request.   I find it revealing that a contract termination occurred so swiftly.

This matter reflects my following concerns:

1.     No notification regarding the sale, extinction, or merger of Integrated Health Network.

2.     No notification of contract transfer or assignment.

3.     No provision of a fee schedule, provider manual, and policy and procedures from the acquiring network.

4.     No information provided about these networks to providers such as: network history; corporate ownership and structure; contact addresses, phone numbers, web & e-mail addresses; options fo opt in or opt out of the network.

5.     No opportunity to update provider contact information in cases of office change  (I changed office and phone number in March, 2012).

6.     No opportunity to update specialties in my practice.

7.     Non-existent quality control.  I was never contacted to re-credential (as routinely happens with Regence, First Choice Network, Premera and other insurance companies/ networks operating in Washington State).   In short, there were no efforts made to verify and update active licenses; inquire of board complaints, malpractice lawsuits or felony convictions since coming into possession of the original Integrated Health Network contract.

The second matter relates to a call I received the other day from a potential client who was insured by Aetna (with whom I am not contracted).  This individual reportedly tried in vain for 6 months to find a psychologist near where he lives or works.  He told me that of the approximately 35 mental health professionals listed on Aetna’s panel, half had inoperable phone numbers.  He found one therapist in a more distant location, but his commute was excessive, and he did not continue treatment.  During the 6 months seeking help, he grew increasingly discouraged.   I suggested he check out-of-network benefits and I would be glad to schedule an appointment either out of network or private pay.   I urged him several times to contact your office to file a formal complaint about a lack of accessible providers on his insurance. Generally speaking,  someone in need for professional help during an extended period of distress should not have to complain to the state Insurance Commissioner, when what they seek is accessible care through their insurance.