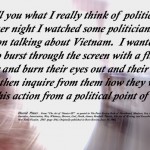 Ever wake one morning and wonder….. 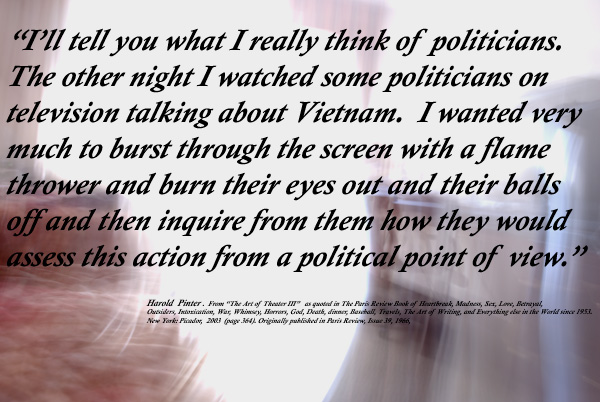 photo by Bob Parker ©2008
Quote by Harold Pinter from “The Art of Theater III” as quoted in The Paris Review Book of Heartbreak, Madness, Sex, Love, Betrayal, Outsiders, Intoxication, War, Whimsey, Horrors, God, Death, Dinner, Baseball, Travels, The Art of Writing, and Everything else in the World since 1953. New York: Picador, 2003 (page 364). Originally published in Paris Review, Issue 39, 1966.

History runs in cycles. Is our national collective memory rather brief? Seems the historical cycle we are in is pretty short to me. Weren’t we here just 40 years ago. True, I am a little closer to Medicare than Woodstock now. I remember the draft; war protests; LBJ stepping down; Nixon resigning in disgrace 5 years later, one step ahead of the impeachment train. Look one generation past and see our present. Gulf of Tonkin and false claims of Iraqi WMD’s. Nixon going after the establishment media NY Times and Washington Post over the Pentagon Papers. Now we have a different Pentagon media relationship: Military officers hired by major media outlets as “independent” analysts who in fact eagerly took their talking points from the Pentagon (not to mention lucrative business connections and contracts). All the while propaganda was propagated on an unknowing public via the national corporate media conglomerates who abdicated their role as government watchdogs. Lies that cost 58,000 US (over 300,000 wounded) and several million Vietnamese lives then, lies verified by a Senate panel that cost lives now. Thousands of US soldiers dead, many tens of thousands wounded and disabled by physical trauma, brain injury, and PTSD. Countless Iraqis dead and injured (because they never were officially counted. Johns Hopkins University estimated in the hundreds of thousands). Millions more Iraqi’s left displaced and homeless. You think Harold Pinter’s rage was misplaced?

A few months ago, I purchased several old issues Ramparts Magazine. While reading one particular section of the May 1970 issue’s editorial, I entered a time warp. Perhaps when you read it you’ll know what I mean. 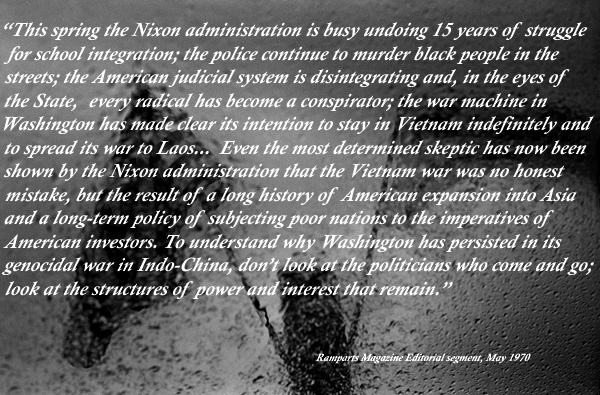 photo by Bob Parker ©2008
Quote from Ramparts Magazine Editorial, May 1970

3 responses to Ever wake one morning and wonder…..